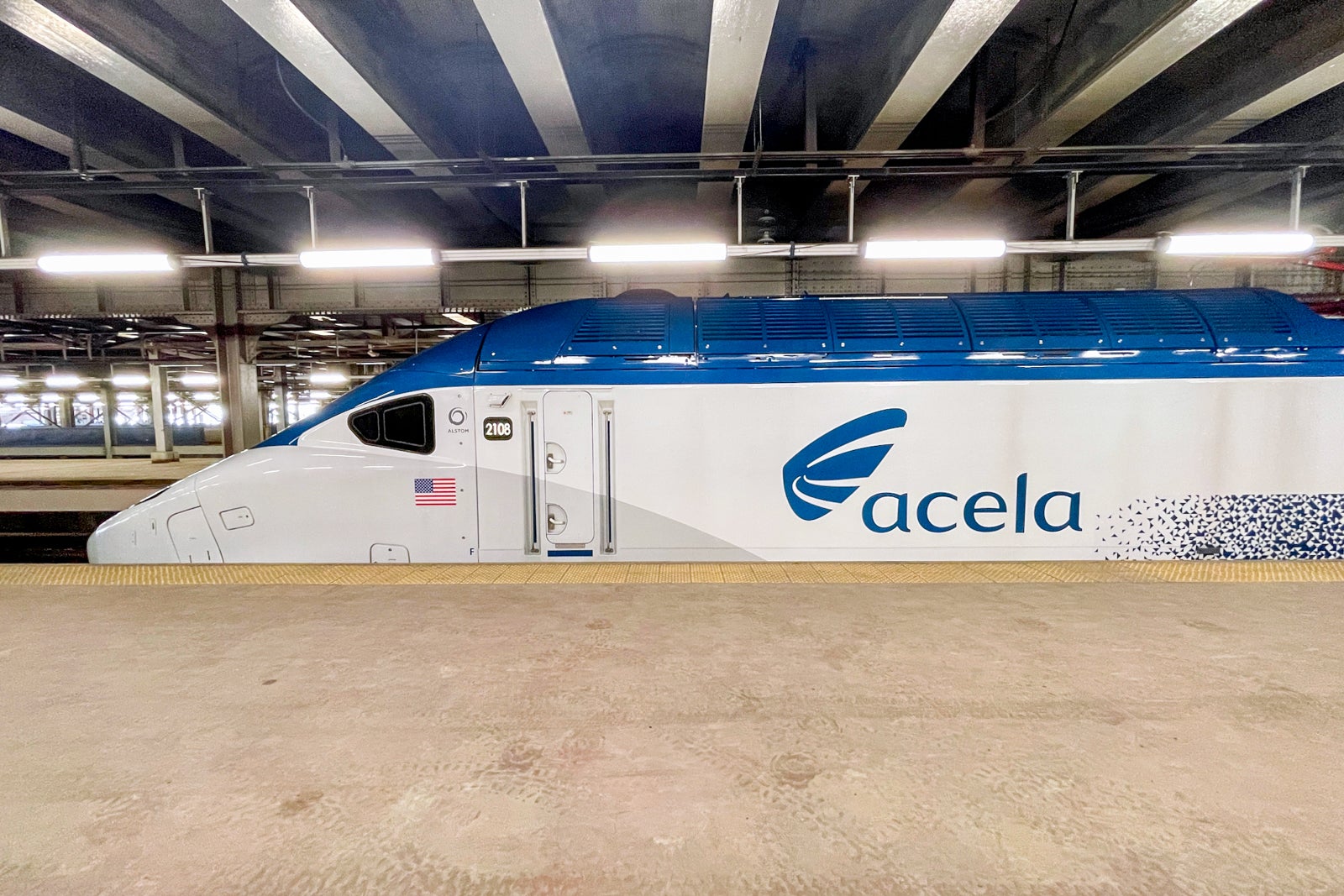 Business travelers living in the Northeast appreciate the convenience of Amtrak Acela service between Boston and New York, as well as between New York and Washington, DC

Trains may not always be the cheapest option. However, it has the advantage of dropping you right in the center of every city along the Acela line.

The Acela trains are more comfortable than the slower Metroliner trains that roam up and down the Northeast. They also have advantages such as faster and more reliable Wi-Fi.

Additionally, the Acela trains have offered a premium car for as long as I can remember. As a business traveler who has taken Amtrak countless times to get between New York and Washington, DC, I have often wondered if an upgrade to first class was worth the price. However, the price difference between a standard Acela seat (referred to as business class) and a first class seat has always been much more than I was willing to spend.

Coincidentally, on a recent trip, the price spread between the two classes of service was narrower than I can recall seeing in the past. That was enough incentive for me to try the upgrade to Acela’s first class, and I booked two train rides for two days of meetings. One was from Boston to New York’s beautiful new Moynihan Hall at Penn Station. The other was from Penn Station to Washington, DC’s Union Station, after a stop in New York.

The cost was an additional $70 to upgrade to first class departing Boston and about $90 to upgrade from Penn Station to Washington, DC. It was really a tale of two very different experiences.

Acela trains depart from South Station in downtown Boston, just a short walk from Faneuil Hall. Some Acela trains also stop at Back Bay Station, although the Amtrak website does not list a station lounge there.

Amtrak includes access to its station lounges with Acela first class tickets. You can also gain access if you have Amtrak Guest Rewards Select Plus or Select Executive elite status. Or alternatively, Amtrak also sells daily access passes to the lounges. Admission at Boston’s South Station is $35 per passenger per day, and at Moynihan Hall the fee is $50. Details for all lounges are on Amtrak’s website.

Arriving at South Station, I walked around for a few minutes before spotting a small waiting area for Amtrak customers. Almost every seat in the cramped room was full.

To the left of the seating area I found a set of glass doors leading to a staircase. A sign on the door indicated that the station lounge was up the stairs. After ringing the doorbell and speaking with an Amtrak employee, I was whisked in and proceeded up to the lounge.

An Amtrak employee quickly checked me in and pointed out a small, self-service snack area. The employee also noted that there was a slightly larger menu of hot drinks that the club staff could prepare for me upon request. However, the offer in the club was quite limited.

There was seating for a few dozen people in the club which also shared space with a satellite police station. Although the place showed some age, there were actually quite a few sockets. The salon also had dedicated bathrooms. In short, it was a quiet place to wait with a free bag of peanut M&Ms.

Once aboard the train I got my first look at first class. It had been about three years since I drove the Acela, but the first-class seat looked very familiar.

I walked over to check out the adjacent business class car. The seats and spacing appeared to be exactly the same, with only a slight color difference from the first class section.

That meant that so far I had paid an extra $70 for a seat and a bag of M&Ms. Obviously I didn’t win. However, I still had the meal service to bail me out.

An amtrak passenger gave me a mini bottle of Fiji water. Things were starting to look up. The manager handed me a menu and asked if I wanted a drink (I politely declined).

The waiter returned shortly after we left Boston to ask for my lunch selection. Something told me to avoid the soufflé, and the lamb didn’t seem like something Amtrak was going to have a ton of success with. I asked if it was possible to have both the buffalo chicken salad and the cheese and fruit platter – but was informed that I could only have one choice.

The salad was, in a word, bad. The chicken was still partially frozen or very overcooked (or both). The carbel lover in me thought I could find solace in the accompanying chocolate chip cookie. It turned out that the cake had lemon blueberry flavor. We call it “interesting”.

Fortunately, a short while later the caretaker brought me a cheese and fruit platter as a replacement. I enjoyed the cheese and fruit, but passed on the second lemon blueberry cake.

(I should note here that I usually don’t pay much attention to the food on board planes or trains. However, since the rest of the upgraded experience was of questionable value, it seemed appropriate to provide some detail about the quality and value of the meal.)

Fortunately, I still had another chance for Acela’s first class to redeem itself.

After a couple of days of business meetings I was ready to head home via Amtrak. One of the reasons I like Amtrak is its flexible options for carrying luggage on board.

I had packed a small collapsible bag on the trip so I could pick up valuable cargo in New York City. After stops at Murray’s Bagels and La Bella Ferrara bakery, my spare bag was filled to capacity—with three dozen bagels and two pounds of Italian crackers—as I headed for Penn Station.

If you’re familiar with Penn Station, the new departure point for Amtrak trains is at Moynihan Hall. You’ll find the entrance one block west of Penn Station, in the old Postal Service building.

The entrance to the station lounge (called the Metropolitan Lounge) is closest to the southeast corner of the building at 8th Avenue and 31st Street. The salon, which opened at the beginning of 2021, is one level above the main hall. There is a small seating area outside the entrance to the lounge, which is one of the only public seating areas in the hall. Although not obvious, you must check in with an Amtrak employee seated at a counter at the top of the escalator.

The station lounge in Moynihan Hall is quite large, with four different seating areas. At the entrance there are lockers for luggage (apparently with no way to actually lock them). Behind the cupboards is a small seating area with a TV. Further into the lounge there is more soft seating and some places where you can work on your laptop. There is also a large dining area with tables of various sizes.

However, the most attractive area of ​​the lounge for me was the balcony area overlooking Moynihan Hall. I actually found it kind of peaceful to sit on the balcony and watch people rush to their train. The seats were fairly distributed and the high ceilings in the hall did a good job of dampening the noise.

At the far end of the lounge are a number of food and drink options. The bar area was still closed during my morning departure. The rest of the food and beverage options were a combination of self-service and items prepared by the lounge staff.

I’m no coffee connoisseur, but the combination of self-serve drip coffee and specialty coffee prepared by the staff should satisfy many caffeine addicts. Also, the breakfast items on offer were actually items people would want to eat. Yoghurt parfait, fresh fruit and breakfast sandwiches looked appetizing. Grab-and-go items like salads and prepackaged avocado toast seemed like they would be great to take on the train.

Obtaining these items required assistance from staff, and it was unclear if there was any limit to how many you could request. My request for a breakfast sandwich and some bagel chips was cheerfully met.

Wi-Fi in the lounge was fast and consistent. I didn’t run a speed test but was able to work without issue for over an hour including streaming music and downloading files. There is also a small business area if you need to use a computer or print a document.

The only mistake in the lounge was boarding the train to Washington, DC

As the scheduled boarding time approached, I went to the front desk to inquire about the status of my train. The staff told me that there was a slight delay and that they would make an announcement once a slot had been allocated.

Unfortunately, by the time they did, general boarding had already been called in the main hall.

One of the few downsides to Moynihan Hall is that it didn’t actually add more train capacity to Penn Station. It has just expanded (and improved) the waiting area. In the former Penn Station, there were multiple stairs for most train platforms. That is not the case for train boarding in Moynihan Hall. Without a dedicated entrance from the lounge to the lanes, you’re left to fight your way through the crowds like everyone else.

Not surprisingly, the first class cabin on my trip to Washington, DC was identical to the cabin on my train from Boston earlier in the week.

On this occasion I was not offered a bottle of Fiji when I boarded. I asked for one as our train left the station and a member of staff brought it to me after handing out menus.

I chose eggs for breakfast from a seemingly overwhelming array of options, thinking it would be the safest. Unfortunately the eggs were pretty bad.

Savvy business travelers don’t know to rely on the airlines for quality sustenance, and the same rule seems to apply to Amtrak’s premium cuisine. A freshly made breakfast sandwich in the cafe car would probably have been a better option.

The rest of my journey from New York to Washington, DC was uneventful. The first-class car was almost completely full and the service mostly ended shortly after breakfast was served.

My two first class experiences on Amtrak were a mixed bag, mostly lacking value for the extra fare I paid.

The onboard experience is remarkably similar to purchasing a standard business class fare. The seats are exactly the same apart from a different color of the leather. The seat pitch is also exactly the same and the meal service is underwhelming.

The salon in Boston is quiet, but the place is tired. The lounge at Moynihan Hall, on the other hand, is spectacular, and arguably rivals any domestic US airport lounge operated by the airlines (the only exception being the AMEX Centurion lounges).

However, there is still an important difference between an airport lounge and a train station lounge. Airport security requires early arrival, and connecting flights are common. Delays can lead to extended airport time that can be turned into productive time in a lounge.

The advantage of traveling by train over flying is the ability to show up at the last minute. In fact, many business travelers cite the primary benefit of the Acela line as a time saver.

Instead of taking a car or subway to an airport outside of Manhattan, it’s easy to work a whole day and run to catch a train, arriving with minutes to spare.

At least for this business traveler, arriving early for a first class train ride is not something I plan to do in the future.

Are we being cheated by airlines? What the numbers show

How loud is too loud? 1 Hotel Hanalei Bay Kauai reopens.